Experience the wild and wonders of nature.

THE OPTIONS ARE ENDLESS- YOUR ULTIMATE TOUR EXPERIENCE. SECOND TO NONE!

The Apartheid Museum opened in 2001, is acknowledged as the pre-eminent museum in the world dealing with 20th-century South Africa, at the heart of which is the apartheid story. The museum is a beacon of hope showing the world how South Africa is coming to terms with its oppressive past and working towards a future that all South Africans can call their own.

The wildlife of South Africa consists of the flora and fauna of this country in southern Africa. The country has a range of different habitat types and an ecologically rich and diverse wildlife, vascular plants being particularly abundant, many of them endemic to the country. There are few forested areas, much savanna grassland, semi-arid Karoo vegetation and the fynbos of the Cape Floristic Region. Famed for its national parks and big game, 297 species of mammal have been recorded in South Africa, as well as 858 species of bird and over 20,000 species of vascular plants.

South Africa is one of the world’s natural gems; a treasure nestled at the southern tip of the abundant African continent. Visitors from all around the world descend on the country to take advantage of the stunning climate, accommodation, hotels, game reserves, natural attractions, and; of course, the huge variety of wildlife.

The landscapes of South Africa offer the full spectrum of habitat types (from dense green forests to arid deserts, and everything in-between), making them ideal for thousands of species. These include exciting predators, birds, mammals, reptiles, amphibians and a huge variety of fascinating insects. These different species are found in plentiful abundance in the game reserves and national parks of the country, as well as in the wild and natural countryside, where they live free.

The Big-5 is one of the main attractions to South Africa in terms of its wildlife. This group includes the African Elephant, Cape Buffalo, Lion, Black Rhino, and Leopard. This combination of predator and mighty terrestrial mammals makes for a once-in-a-lifetime sighting of some of the world’s most impressive species.

MAMMALS
There are about 230 mammal species to be found in South Africa, which include a collection of impressive predators. These make for fabulous sightings on any game drive or safari. Of these hundreds of species, there are two that are critically endangered (De Winton’s Golden Mole and the Riverine Rabbit) and 11 that are endangered (including the African Wild Dog, the Mountain Zebra, Sei Whale and Blue Whale). These numbers are in line with the IUCN statistics.

Marine mammals are a major draw-card to South Africa, thanks to its extensive shoreline. Dolphins can frequently be seen frolicking along the coast, swimming in schools of up to 200 or 300 individuals. Whales (such as the Humpback and Southern Right whales) appear along the local coast between July and December, and promise fabulous performances for those on the shore or on formal whale-watching tours.

Avian enthusiasts are well-rewarded when they visit this country, and are reminded to bring their binoculars and identification aids.

REPTILES AND AMPHIBIANS
The wild side of Africa is intriguing and wondrous, presenting fascinating species. Some look prehistoric, others frightening, but all are important contributors to the local biodiversity. The reptiles that are endemic to this country include the Geometric Tortoise, Speckled Padloper, Southern Adder, Giant Girdled Lizard, and the Cape Legless Skink.

Amphibians that can only be found in South Africa include the Table Mountain Ghost Frog, Knysna Spiny Reed Frog, and Mistbelt Chirping Frog.

SOUTH AFRICA TRAVEL
Start planning your wildlife adventure to South Africa here on wildlifegetaway.co.za You will have a delight for choice as the options for accommodation in South Africa are varied and include excellent hotels, game lodges, guest houses, smaller B&Bs and and many self catering options for you to choose from, such as holiday homes, cottages and apartments. Enjoy your travel planning.

South Africa is one of the best places to visit to witness the Big Five wild animals in their natural habitats. The phrase, coined by hunters, refers to the five most difficult animals in Africa to hunt on foot. These are the lion, African elephant, Cape buffalo, leopard, and black rhinoceros.

Experience one of South Africa’s fastest growing eco-adventures with thousands of satisfied thrill-seekers having already caught the bug. A Canopy Tour takes you on an unforgettable adventure as you slide from one platform to the next along a series of steel cables set amongst magnificent natural surroundings.
The scenery high up within the forest canopy is spectacular. Enjoy the view from above while taking in waterfalls and spotting birdlife amongst the surrounding trees. Our professional guides will assure the safety of each group and point out interesting facts along the way.

God’s Window is so called for the panoramic view of the Lowveld more than 900 m down into lush indigenous forest clad ravine. Enjoy the magnificent views, canyons, rock formations, waterfalls and breathtaking scenic splendour from the area known as God’s window. It is no wonder that Mpumalanga is known as Paradise Country!

Hole in the Wall

The Hole in the Wall at Coffee Bay in the Eastern Cape is a unique structure with a huge detached cliff that has a giant opening carved through its centre by the waves. The local Xhosa call this place “izi Khaleni”, which means “place of thunder”. During certain seasons and water conditions (high tide) the waves clap is such a fashion that the concussion can be heard throughout the valley.

Sharks are magnificent creatures that never fail to capture the avid attention of mankind. Yet, it is apparent that many people have complete misconceptions of sharks. Most people have a 90% fear level and 10% respect level. Yet, why not try changing those misconceptions and learning the truth about sharks in the best possible way – shark cage diving. Shark cage diving in South Africa has grown greatly in popularity and there are now a number of commercialized locations to view these incredible monsters of the deep.

An hour’s drive from Johannesburg and Pretoria, are the Sterkfontein Caves, world famous for their fossil finds and a well-known visitor destination. After an extensive face-lift in 2005, the Sterkfontein Caves is now home to a top restaurant, conferencing facilities, improved access into the caves, new walkways and a boardwalk past the excavation site where world-acclaimed fossils have been discovered. Declared a World Heritage Site by Unesco in 1999

South Africa is known as the best land-based whale watching destination in the world. It also offers many opportunities to get closer to the whales by boat. Once a year, Hermanus hosts a whale festival that attracts thousands of international visitors who flock to this seaside town to exhilarate in the unique natural environment, watch the whales and revel in music, enjoy great cuisine and participate in the many activities which are available during the festival. The whale trail also attracts large numbers of tourists and is booked out 2 years in advance.

The following are designated as National Parks of South Africa: 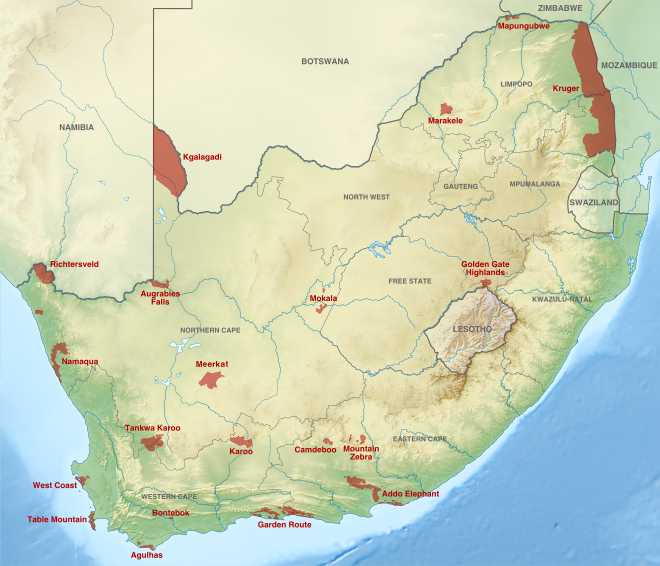